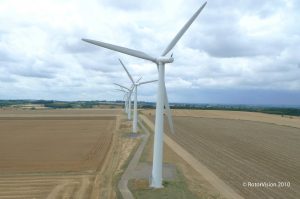 Westmill, located in Oxfordshire near the Wiltshire border, is unique with both wind and solar community-owned electricity generation on one site. Both projects were pioneered by farmer Adam Twine.

Adam Twine was inspired by a trip to Denmark where 20% of the country’s renewable energy generators are owned by communities. Once the planning hurdle was overcome, nearly 2,500 people opted to buy shares in the five turbines; with preference to the amount of shares given to those living locally so reaping the financial rewards, retaining the profit locally, and feeling they have ownership of energy production in their area.

The first wind farm in the south-east of England

The flat, open, elevated landscape is ideal for a wind farm. Fully operational in March 2008 and costing £7.7 million, this pioneering project was the first wind farm built in south-east England. It is 100% community owned by over 2,300 people, who invested in Westmill Wind Farm Co-operative Ltd in order for the wind farm to be built. The five turbines are 150m apart in a line, open to the prevailing south-westerly wind. They take up less than 1% of the farmed area. Each year, the 6.5 MW wind farm generates about 11GWh of green electricity equivalent to the electrical consumption of over 2,600 homes. The carbon emissions incurred in the construction of all elements the wind farm were paid back in the first year of operation, so it will generate zero carbon energy for the rest of the 20-year design life.

The world’s largest, community-owned solar park of its time

Westmill Solar Park, 100% community owned after construction, was the first community owned solar park in the UK and is believed to be the largest community-owned solar project in the world. There are over 1,600 members benefiting from a share of the project revenues and a say in how the cooperative is run. Annually it generates the equivalent to a year’s electricity consumption of 1,135 homes, and enough to prevent 2,300 tonnes of carbon dioxide emissions annually.

In July 2011, it went live. The 20,000 polycrystalline photovoltaic panels, on 30 acres of land, generate about 4.8GWh of green electricity annually. The solar park cost approximately £13 million to build. A year after it was built, Westmill Solar cooperative had a share offer and bought 100% of the solar park making it the country’s first, and the world’s largest, community-owned solar park.

Real-time production data of both the wind turbines and solar panels can be tracked.

When the turbines were first erected on site they were named Turbine 1, 2, 3, 4 and 5. This did not seem very exciting so we asked the five closest primary schools to use their creativity in renaming the turbines. Liz Rothschild went into work with each year 5 group showing them a film of the construction of the turbines, talking about how they work and what they do and then exploring with them how names get developed for new objects and what the different approaches they might take, looking at how alliteration can work well in names and so on. It fitted in ideally with literacy work in the National Curriculum. Then came the difficult bit. As the entries poured in we had to choose the best five out of so many brilliant suggestions. Korky Paul, the brilliant children’s author and illustrator from Oxford, agreed to help and finally we narrowed it down to:

We unveiled the winning names at the next public open day and presented the pupils who had named them with prizes.